Hong Kong-based Swire Properties is moving forward to convert three Brickell sites into a 5 million-square-foot, mixed-use project centered on retail expected to begin construction by the second quarter of next year.
The prime Brickell sites at 601, 700 and 701 S Miami Ave. are destined for an artful mix of upscale components that are to fit well within this booming retail hub that includes the Mary Brickell Village complex and other nearby open-air shopping centers.
“It’s a major project for Brickell and urban Miami,” said President Stephen Owens.
The development company has hired Arquitectonica, which has designed several projects for Swire in the past, as the architectural firm to design the CitiCentre project.  “The reason why we picked Arquitectonica is because this is similar to other urban projects they have done for us in Asia,” Mr. Owens noted.
Swire has developed other sophisticated urban projects of similar scale designed by the architecture firm, including Festival Walk, a multilevel shopping, dining and leisure complex with nearly 1 million square feet in Hong Kong.
“This is a natural evolution of the relationship between architect and developer that has been building,” he said. “We’ll be designing this project in our hometown. It’s very exciting. It will change that location and it’s a historical project for Miami.”
“It brings a significant retail opportunity to the urban area,” he said. If the majority of CitiCentre’s planned 5 million square feet are designated retail, it would create a giant shopping hub unlike anything in the state. Today, Dolphin Mall in Doral has about 1.4 million square feet of retail space, while Sawgrass Mills Mall in Sunrise, considered the second largest mall in the state, has almost 2.4 million square feet of retail.
Source:  Miami Today 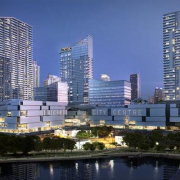