Investor Yoav Merary just paid $43 million to buy the Cypress Park West I & II office campus in Fort Lauderdale, plus a spit of adjacent land, from the Stockbridge Capital Group.
In two separate deals, Merary bought both the office campus at 6700-6750 North Andrews Avenue, as well as a small chunk of nearby vacant land along Cypress Creek Road, according to county records.
For the larger of the two sales, Merary used an LLC called CPN West to buy the office park, which houses about 225,000 square feet of rentable space and a six-story parking garage with 350 spaces. That deal broke down to about $189 per leasable square foot.
Data from the CoStar Group shows asking rents average $18 per square foot and the buildings were more than 95 percent occupied at the time of their sale. One of the largest tenants is Microsoft, taking up 43,675 square feet, and shared workspace provider Regus, which 22,547 square feet.
The larger deal also includes 6.2 acres of vegetated land right behind the offices.
In the smaller deal, Stockbridge sold a separate parcel of land measuring just under 1.5 acres to F Land LLC, another company managed by Merary.
Merary financed the deals with a $29.25 million loan from Benefit Street partners CRE Finance, a lending arm of asset manager Providence Equity, county records show.
Stockbridge had purchased both the offices and land for $32.95 million and $800,000, respectively. That purchase broke down to $146 per rentable square foot.
Merary is the same investor who flipped a two-story apartment building in Surfside to the Chateau Group for $6.2 million last year. That property is now part of Chateau’s extensive holdings in the oceanfront city. 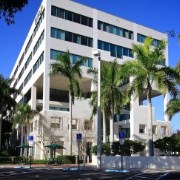