Three Doral office buildings housing major national tenants like Allstate Corp., HSBC Bank and Samsung sold for $73.75 million this week.
The deal closed Tuesday for about $259 per square foot.
Doral Costa Capital LLC, an affiliate of Aventura-based Triarch Investment Group Inc., pocketed the 17.8-acre Doral Costa Office Park portfolio that included the buildings and about 0.8 of an acre of vacant land.
Attorneys Oscar Rivera and David Halberstein with Siegfried, Rivera, Hyman, Lerner, De La Torre, Mars and Sobel represented the buyer.
The transaction included the three-floor, 132,704-square-foot building at 9800 NW 41st St.; a four-story, 133,117-square-foot property at 9850 NW 41st St.; and a three-floor, 19,739-square-foot building at 4090 NW 97th Ave., which are 96 percent leased.
Triarch is led by Halberstein’s father Daniel, Jorge Linkewer and Mario Grosfeld.
The seller, VRS Doral LLC, purchased the land in 1999 for $5.73 million, according to Miami-Dade County records. Two of the properties were built in 2001 and the third in 2006.
The deal closed in two months in what Halberstein described as “a really tight timeline.”

“It’s just becoming more and more common these days, especially when dealing with an institutional seller,” he said of fast-paced deals. “It’s even more important and critical that due diligence is thorough because you can’t afford to have any loose ends when you’re working with such a strict timeline.” 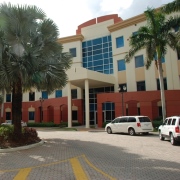