While redevelopment plans for the Plantation Fashion Mall are moving forward under Art Falcone, a legal battle has emerged between the property’s previous owner and a law firm that claims it had nothing to do with the project.
The suit was filed by Tangshan Ganglu Steel & Iron Co., a Chinese conglomerate that hoped to redevelop the Plantation mall, but lost the property during a bankruptcy auction in March 2015. It claims law firm Becker & Poliakoff was part of the reason Tangshan and its founder Zheng Zheng Du lost upwards of $140 million on the failed redevelopment, according to a report in the Daily Business Review. Becker & Poliakoff, however, claims it never represented the company, the Review reported, and that the suit is an attempt by Tangshen to recoup some of its millions lost during the bankruptcy case.
At the center of the suit is an alleged conflict of interest from Becker & Poliakoff, according to the Daily Business Review. Tangshan said in the suit that the law firm represented both it and minority partner Weng Chen, who managed the mall’s three controlling entities. Tangshan owned a 99 percent interest in the entities. After a falling out between Du and Chen, the suit alleges Becker & Poliakoff filed a document with a forged signature from Du that gave Chen control of the project.
A Broward bankruptcy judge later ruled the signature was indeed a forgery, according to the Daily Business Review. The damage, however, had already been done. The Fashion Mall was beleaguered by a foreclosure filing, damage from Hurricane Wilma, and now a contentious legal battle between its owners. Art Falcone’s Encore Housing Opportunity Fund had the winning $37.7 million bid in the bankruptcy auction, and the developer has since launched plans to follow through on redeveloping the Fashion Mall. 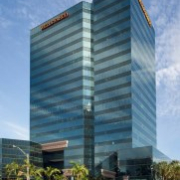 Dang, That Was Fast! Lawsuit Over Fashion Mall Redevelopment Dismissed