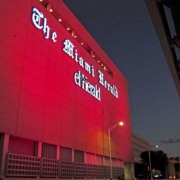 Acura filmed part of a national television commercial inside the Miami Herald building at One Herald Plaza in downtown Miami on Saturday. It was part of a four-day shoot for a commercial for an Acura sedan, location manager Dave Egan said.
Scenes for the commercial will also be shot in the Omni parking garage in downtown Miami, the Shelborne South Beach, and Miami International Airport in the next few days.
Saturday’s shoot was initially set to be filmed elsewhere. “The client saw the Herald building and he just had to shoot there,” Egan said.
The commercial will feature a split screen, with an office filled with attractive workers on one side, and a lounge on the other side, Egan said. In order to film, 60 extras and 40 crew members were brought in. Scenes were also shot at a nearby Genting-owned parking lot.
Source:  Miami Herald