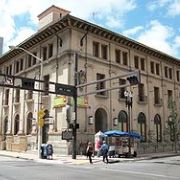 A landmark but vacant post office building in downtown Miami has found a tenant —­ the American Institute of Architects’ Miami Center for Architecture and Design.
The building, at 100 NE First Ave., is believed to have been built around 1912. It is listed on the National Register of Historic Places and was once touted as the most modern federal facility south of Washington, D.C.
The register lists it as a former post office, but federal courts were on the second floor — Miami had been incorporated for only 16 years at the time — and other federal services, including a weather center, were on the third. According to a historical plaque outside the building, the weather service’s wind gauges were blown away in the great hurricane of 1926. The federal offices were later vacated and the building was for a while the home of AmeriFirst, once a leading local financial institution. A later tenant, in the 1990s, was Office Depot.
The building has long been owned by developer Scott Robins Cos., which purchased the property about a decade ago. In a 2005 article, Robins said he was considering converting it to condos. The website of the Scott Robins Cos. lists the property lease rates at prices ranging from $15-$30 per square foot.
The AIA will use the space for meeting space and educational programs regarding architecture and design. The AIA has similar centers in other major cities. The space will also house permanent and curated exhibits.
The lease is for 5,500 square feet. The Robins organization was represented by Tony Cho and Tony Arellano, of Metro 1 Commercial, and Louise Bendix of ComReal represented AIA Miami. The Miami Downtown Development Authority is also supporting the project’s development.