At an opening ceremony in April, Riviera Point Development Group CEO Rodrigo Azpurua, CCIM, noted, “Bringing the Miramar market its first new Class A office development since 2009 has been a ‘win’ for the city’s economy and job base, for the many growing businesses that now call the Professional Center home, and for our investors who are achieving their dreams of living in this country.” A total of 34 investors from several South American nations invested to create the $17 million Professional Center at Riviera Point.

Broward County District 8 Commissioner Barbara Sharief assisted with the ribbon cutting. She acknowledged the positive economic impact Azpurua and his team created as they proved that EB-5 foreign investment, although a tough challenge, can be used to create office spaces where local professionals can thrive.

Commissioner Sharief said, “We appreciate their pioneering approach and determination, and we are so proud that the Riviera Point team continues to expand and grow in the beautiful City of Miramar.”

The Professional Center at Riviera Point’s first building opened in June 2014 and is 100 percent leased to a diverse roster of small-space tenants including insurance, accounting, law, marketing and advertising firms. Leasing is underway for the newly completed second building. Azpurua said he plans to create an EB-5-funded office development geared to larger tenants, the Class A, 72,000-square-foot Riviera Point Corporate Center, at 145th Avenue and Southwest 27th Street, Miramar.
Nationwide, EB-5 funding has typically been used for larger projects, but creating office developments of about 40,000 to 70,000 square feet that target specific market needs is a core strategy for Riviera Point Development Group, which is also active in Miami-Dade County. Azpurua and his team are developing another EB-5-funded office complex — the 41,000-square-foot Riviera Point Business Center at Doral near Miami’s Dolphin Expressway/Palmetto Expressway interchange.  That $9.5 million project is under construction for November 2015 completion, bringing first-generation office condo space tailored to small-space users.
Under the U.S. Citizenship and Immigration Services (USCIS) program, the EB-5 program allows a foreign national interested in obtaining permanent U.S. residency to do so by investing in a commercial enterprise that generates at least 10 jobs for U.S. workers for two years.  The EB-5 Visa then becomes permanent.  The qualifying investment for a project such as Riviera Point’s Miramar and Doral office centers, each located within a government-designated Targeted Employment Area (TEA), is $500,000.
Azpurua, a prominent EB-5 expert, is a frequent presenter at EB-5 conferences in the U.S. and abroad.  His development background includes over 1 million square feet of office space in Florida projects, and he authored a book,  EB-5 Visas & Real Estate Development, to guide developers through the complex EB-5 process. 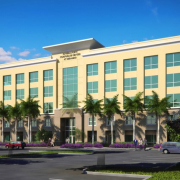