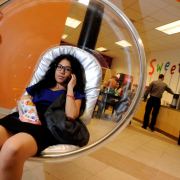 Built in a once empty shopping center off Coconut Creek Parkway, a new 100,000-square-foot headquarter office becomes the new home today for Saveology, a company that markets cable services, mobile phone, high-speed internet, and home service deals.
The center’s 600 employees also enjoy a koi pond, putting green, basketball court, free jelly beans, and soon, a barbershop. Small monkeys swing from branches in their special habitat and macaws squawk as workers go about their business.
Chief executive Benzion Aboud said he’s hoping the new headquarters will create a “fun” workplace and draw technology workers from other parts of the country
“We want them to come to work and make this their second home,” Aboud said.
Google and other technology companies served as inspiration for Aboud and his business partner and childhood friend Reid Shapiro as they designed the work environment.
The animals and other office features encourage people to interact and to “think outside the box,” Aboud said.
“You have something to do on breaks. Time goes faster,” said Diego Penaloza, 21, who has worked in sales for the company for two years.
Aboud said workers are encouraged to meet and exchange ideas in the office atrium, which sports brightly colored furniture and gum-ball machines.
Some employees said that while they like the animals, the spacious size of the office and ample parking are their favorite features. The company was previously housed in two buildings in Fort Lauderdale, and parking was tight, workers said.
At work, Saveology employees answer calls from customers of consumer companies including Verizon Wireless, Radio Shack and Apartments.com. Aboud said the private company’s revenues grew by 20 percent in 2010-2011. He expects a 30 percent sales increase in 2012.
Over the next three years, Saveology plans to add 700 workers in sales, marketing and advertising, and technology support.
As for the new headquarters, it was a “bargain,” said the chief executive. Beyond the amenities, the company pays $50,000 a month for rent.
Source:  Sun-Sentinel