Americaribe and John Moriarty & Associates of Florida won the nearly $500 million project to manage vertical construction of the bulk of Swire Properties’ Brickell CityCentre project, including the shopping center and residences.
The $1.05 billion project consists of 5.4 million gross square feet on South Miami Avenue between Sixth and Eighth streets. The joint venture between the contractors will be responsible for completing phase 1, which includes the luxury shopping center, two residential towers, a hotel, serviced apartments, a wellness center and Class A office space by the fourth quarter of 2015.
“It was important for us to select a team that delivered the most competitive schedule and met Swire’s high standards for Brickell CityCentre,” Christopher Gandolfo, Swire Properties’ senior vice president of development, said in a statement. “We believe this team, which brought together the best resources of two well-respected companies will build a project that will redefine urban living in Miami for decades to come.”
Americaribe is the local subsidiary of French construction company Bouygues Bâtiment International and was chosen for its expertise in constructing large-scale multifaceted international projects. John Moriarty & Associates’ knowledge of the local market won it the job, Swire said in a statement.
Swire Properties, established in Miami since 1979, is one of South Florida’s leading international developers of commercial communities, including the $1 billion Brickell Key community.
Brickell CityCentre would be the largest project Moriarty has undertaken locally, even larger than The Related Group’s 1,800-unit condo Icon Brickell project to the northeast of the Swire site. Moriarty, one of the region’s top builders, is also currently working on construction of the Perez Art Museum Miami in downtown’s Museum Park.
Swire chose Turner Construction Co. with Dragados USA to construct the foundation and parking phase of the project. 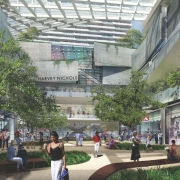