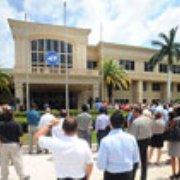 Tyco International officially left behind the opulent offices at One Town Center Road on Monday for a smaller, but amenity-filled building at 1501 Yamato Road in Boca Raton.
Employees seem enthused about the ergonomic desks, which can be used standing up as well as sitting, and a “main street” of shops where they can buy Starbucks coffee, get a massage, work out in the fitness center, or find in-person help with technology issues.
Offering more amenities to workers is common among companies that move into a smaller office space, said Eric Anderson of Anderson Architecture in Boca Raton, which renovated the 171,000 square foot building. “The way people work you don’t need as much space anymore,” he said.
About 700 employees will occupy the new office, a former bank building where Tyco has a long-term lease. The building will house the North American headquarters for ADT Security Services as well as Tyco’s ADT Latin America unit, SimplexGrinnell fire protection business, and corporate employees.
Moshe Shmia, a software engineer for ADT, said he likes working at his adjustable desk at the new office. “I’m standing up during the day. It’s better for your health.”
Information technology manager Matthew Craig said the new building is a big improvement. “It’s definitely a people-oriented building. People have a lot more opportunity for just being comfortable.”
A cross-section of about 20 Tyco employees picked the paint scheme, fabric and other décor. “We were the final decision makers,” said human resources worker Julie Marlin, who was part of the team.
Tyco will get $1.3 million in state and city economic incentives if it expands its employee presence in Boca Raton by at least 100 new employees over the next year.
Get a peek at some of the buildings amenities: