The Urban Land Institute cut its forecast for U.S. commercial real estate sales by 12 percent to $748 billion through 2014 because projections for economic growth are “down considerably” from six months ago.
Deals for properties such as office buildings, shopping centers and warehouses probably will be $223 billion this year, $250 billion next year and $275 billion in 2014, according to a ULI survey released today of 39 economists and analysts from real estate investment, advisory and research firms. In a March report, sales were forecast at $250 billion this year, $290 billion next and $312 billion in 2014.
The forecast “is generally less optimistic regarding the economy and the performance of commercial real estate,” the Washington-based institute, which researches land-use and development issues, said in its survey.
A recovery in commercial real estate nationwide is being damped by sluggish economic expansion. The lowered forecast is th e result of slower-than-expected growth in the U.S. gross domestic product, which is now projected to expand 2 percent both this year and next year before rising to 2.9 percent growth in 2014, the ULI said.
“These forecasts are down considerably from the spring 2012 forecast, which forecast the GDP would grow by 3 percent in 2013,” according to the semiannual “ULI Real Estate Consensus Forecast.”
The forecast for new commercial mortgage-backed securities also was cut. CMBS issuance probably will total $35 billion this year, $45 billion next and $60 billion in 2014, the ULI said today. That’s down from a March forecast of $40 billion this year, $58 billion next and $75 billion in 2014.
One projection boosted from the last survey was for the performance of real estate investment trusts. Annual returns for equity REITs are forecast to be 15 percent this year and 10 percent both next year and in 2014. That’s u p from the previous forecast of 10 percent this year, 9 percent next and 8.5 percent in 2014, the institute said.
“If you’re a large institutional owner or REIT or a leveraged individual, all of those holders are interested in holding real estate,” Douglas Poutasse, a Boston-based executive vice president at real estate adviser Bentall Kennedy who participated in the survey, said on a conference call today. “They are happy to hold real estate because of the very attractive returns, especially compared to the bond market.”
The ULI conducted its survey from Aug. 21 to Sept. 14. 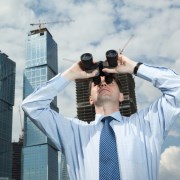 Crocker Adds Another 476,000 SF To Portfolio