Demand over the past 6 months has reached an all-time high due to the influx of out of state businesses looking to make South Florida their new home. Price points for warehouse space, in some cases, have reached as high as $180 to $200 per square foot due to lack of industrial product available for owner-occupiers. “Most deals of recent highlight “record-breaking” transactions on a per square foot basis, which is great,” Conness explained. “However, on the other end of the spectrum, we think it’s important to point out that we represented a valued client and got them a heck of a deal in a super competitive market.”

In addition to its recent warehouse acquisition, Modern Miami also owns its showroom located at 2050 SW 30th Avenue in Pembroke Park, a 29,000-square-foot property with more than 200 feet of frontage along I-95.

Conness was involved in Modern Miami Furniture’s purchase of its Pembroke Park property in 2012, representing the former owner, City Furniture, in the transaction. Nearly 10 years later, and having remained in close communication with Modern Miami, Conness was able to help the client secure a larger foot-hold in South Florida for years to come.

“The initial plan was to renew Modern Miami’s warehouse lease, however, after analyzing the client’s needs and future growth plans, it was determined that purchasing a property better aligned with the client’s long-term goals,” explained Conness. “Our efforts led to a building three times larger than their leased premises, providing the client rental income in the near term and the ability to grow into the full 77,000 square feet in the future.”

The facility features a 2,200-square-foot office/showroom, 11 docks, 2 ramps, and a sprinkler system. Situated on a 3.5-acre lot, there is an abundance parking and plenty of room for trucks/trailers. The property is located on the west side of North 29 Ave. in Hollywood, offering great visibility and ease of access to all major highways, and is located just minutes to Fort Lauderdale/Hollywood International Airport and Port Everglades.

The Seller was represented by Esti Kadosh of Coldwell Banker Commercial. 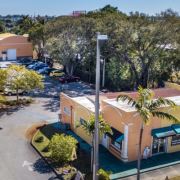