NAI/Merin Hunter Codman, Inc. acted as exclusive advisor in negotiating a 29,000 square-foot, Class-A office lease in Palm Beach Gardens, Florida for G4S Government Solutions (“G4S GSI”), the U.S. government’s largest contractor for professional security services.
G4S GSI was considering leaving its current location at Fairway Office Center but instead, in a complicated transaction, NAI/Merin Hunter Codman negotiated early termination of the firm’s existing lease, and in its place structured a new long-term lease that achieved nearly $1 million in savings for the security firm. The transaction also keeps G4S GSI committed to Palm Beach County for years to come. G4S GSI, formerly known as Wackenhut Services, Inc. has over 12,000 employees protecting key sites in the U.S. and abroad.
“We perceived the market for office space as soon bottoming out and poised for a rebound,” said Bob Schneiderman, a Principal of NAI/Merin Hunter Codman and Head of its Corporates Services Division. “We advised G4S Government Solutions to capitalize on remnants of market weakness to strike a superior deal now to cement savings in the future.
Added Paul Donahue, President and Chief Executive Officer of G4S GSI, “We immediately reduced costs by hundreds of thousands of dollars, and when we look at the deal in its totality, our bottom line will benefit from nearly $1 million in savings.”
The core competencies of G4S GSI, founded in 1960, involve providing high-caliber security and fire services to federal, state and municipal government entities for critical assets and infrastructure. The firm has expanded to include additional services such as base operations support, de-mining and unexploded ordnance services, canine services, training support and unarmed security among other services. For years, the firm had its headquarters along I-95 but in more recent years, took over the space of an affiliate at Fairway Officer Center, a three-building complex located off PGA Boulevard by the juncture of Florida’s Turnpike. Between that move and company mergers, G4S ended up subject to a lease that it did not originate and was subject to seven different amendments.
Said Schneiderman, “This was an opportunity to strike a new deal that better suited the operating needs of G4S Government Solutions. We negotiated added measures of lease flexibility as well as protection against escalating operating expenses among other benefits.”
The new lease followed an exhaustive search undertaken by NAI/Merin Hunter Codman for optimum long-term headquarters for G4S GSI. Countless alternative locations were considered, but after extensive negotiations with Fairway Office Center, G4S GSI ultimately chose to remain at the office complex.
G4S GSI occupies the entire third floor of 7121 Fairway Drive as well as a portion of the second floor. Fairway Office Center is a three-building complex totaling 224,000 square feet, adjacent to the PGA National Resort & Spa. The complex, which is institutionally owned, features state-of-the-art fiber optic communications technology and emergency generator backup for uninterrupted tenant operations. The concrete and steel buildings are three to four stories in height. 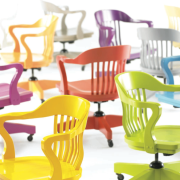