Anthony DiTommaso and Rusty Warren, co-CEOs of Ivy Equities, the Greenwich, Conn.-based executives, whose firm Ivy Realty, is headquartered in Montvale, N.J., entered a market they had set their sights on with the $7 million purchase of 250 Royal Palm Way.
DiTommaso, 47, and Warren, 44, have more than 9 million square feet of commercial real estate in the New York Metropolitan area and along the southern part of the Northeast Corridor in their portfolio, but after the economic downturn began to investigate investment in southeastern Florida.
“When 250 Royal Palm Way became available, we saw it as a rare kind of deal, a building on a marquee block, Banker’s Row, in the best location with the best potential,” he said, noting that an island building such as this doesn’t come on the market often. “If we have another chance at a Palm Beach property, we will take it.”
The 25,000-square-foot office building at the corner of Royal Palm Way and Hibiscus Avenue was the first Ivy acquisition in Florida. “We now have 600,000 square feet from Palm Beach County to Fort Lauderdale,” DiTommaso said. “But this is our first effort.”
After the purchase of 250 Royal Palm Way, Warren and DiTommaso proceeded to give what they saw as a prime, but dated and somewhat awkward property, a complete renovation.
They enlisted the West Palm Beach firm Glidden Spina & Partners for the job, spending an undisclosed sum on the update, which Warren describes as “contemporary Mediterranean style” in keeping with the context of the Banker’s Row corridor. DiTommaso points out that the renovation included carrying streetside facade details to the back and sides of the building, to give it a more finished and integrated appearance.
Warren and DiTommaso also indicated that the first major building tenant has signed a lease for about a quarter of the available space. They said that Northern Trust would be moving in to 250 Royal Palm Way at the end of 2012.
WGCompass Realty Companies handles leasing for 250 Royal Palm Way. 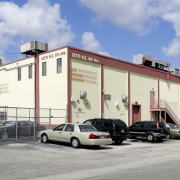