Ivy Realty, a Connecticut investment firm, just paid $56 million to pick up a prime piece of Fort Lauderdale’s financial district: Tower 101.
Tower 101 is a two-building office complex located at 101 Northeast Third Avenue with 444,326 square feet of space including the parking portions. The larger building is 21 stories and the smaller is six stories. Both were built in the 1980s and enjoy an occupancy rate above 90 percent.
In 2012, private investment firm Banyan Street Capital and its partner PCCP put down a sizable $28.7 million to acquire the complex. About three years later, the Brickell-based firm raked in a whopping $56.3 million for the sale of Tower 101 — that’s $27.6 million more than its purchase price.
CBRE’s Chris Lee, who represented Banyan and PCCP for the deal, said a few factors can explain the big price leap in such a short amount of time: Banyan completely renovated the smaller six-story building, which was dilapidated at the time of its purchase; there’s room for rent growth in the buildings; and the central business district is becoming an attractive area for new development.

“There’s been a phenomenal amount of teardowns of older product and new development of luxury rental housing there,” Lee said. “Because there’s been such phenomenal rent growth in the market, the truth is most of the [Tower 101] leases done a few years ago are below market rent. ”

The buyer, Ivy Realty, was founded in 1996 and specializes in acquiring commercial real estate. At first it operated mainly in the northeastern United States, but in recent years has expanded into South Florida in a big way: the firm is regularly sighted trading office buildings here for tens of millions of dollars.
For its purchase of Tower 101, Ivy took out a $35.9 million loan from Bank of America.
The office complex as also the winner of the Fort Lauderdale central business district’s biggest office lease last year: a 52,683-square-foot space for Uniforms Direct. 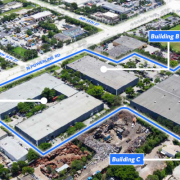