A New York-based investor bought the 10th floor of One Flagler, a newly converted office condo tower in downtown Miami.
County records show Joseph Weinberger Investments LLC, an entity based in Hialeah but controlled by Weinberger, paid $3.72 million for the 10,242-square-foot floor at the end of March. That breaks down to about $363 per square foot. The sale was a 1031 tax-deferred exchange, according to a press release.
Midgard Management brought Newgard Development Group on in 2014 as part of a joint venture to convert the building’s 143,000 square feet into commercial condos. One Flagler, at 14 Northeast First Avenue, began recording closings in September for an average of $345 per square foot with prices ranging from $200,000 to $3.15 million.
Property records show Weinberger, CEO of New York-based JF Capital Advisors, bought Unit 1000 A-Q, which comes out to 17 parcels. Fabio Faerman and Eduardo Citcioglu of FA Commercial/Fortune International Realty represented the developer, while Anna-Denise Miranda of Fortune International Group represented the buyer, according to the press release.
Faerman, who is also the sales director for One Flagler, told The Real Deal the tower is currently 90 percent sold.
Canadian investor Danny Lavy is also a new owner at One Flagler. In October, he paid more than $10 million for the first two floors of the building, which includes ground-floor retail and office space on the second floor. 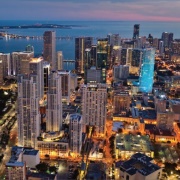 Another Big Project Coming To Brickell?