A 30-year-old warehouse district on the fringe of downtown Ft. Lauderdale is on track to become the city’s next hot spot.
Some envision it as a version of Miami’s Wynwood Arts District, with trendy cafes, galleries and boutiques occupying the dated buildings near the railroad tracks between Sistrunk and Sunrise boulevards.
The transformation is just waiting to take off, says area art gallery owner Larry Clemons, but is dependent upon reduced parking requirements to make it practical for new businesses to open. “The synergy for this area is such a no-brainer,” Clemons said. “What I’m talking about is a true village, where on the weekend, everybody goes.”
The city agrees and has given initial approval to reduced parking in the area east and south of the tracks. It is expected to extend the rules into the triangle area bordered by Andrews Avenue, Sunrise and the tracks. Already some seeds of change have sprouted. There’s the FAT Village Arts District along the tracks west of Andrews near Sistrunk, and the Laser Wolf craft beer bar in the vintage 1920s train station at the tracks and Northeast Third Avenue.
The new businesses would serve the Flagler Village community to the south and the hundreds of new apartments now under construction there. And they would benefit from the planned nearby stops for the Wave electric streetcar, the All Aboard Florida rail between Miami and Orlando, and the proposed Tri-Rail Coastal Link.
Mayor Jack Seiler said “this is an area that’s crying out for some sort of relief.” He and commissioners said they are receptive to the proposed changes, which would create opportunity for property owners who are ready to get on board with the idea.
The changes can’t come fast enough for Clemons, who already has a tentative contract with the owner of the Whole Enchilada Mexican restaurant to open a café and bar in Gallery 721, which used to be a dry cleaners. The area is perfect for David Cardaci, whose Whole Enchilada restaurant is just a few blocks to the east on Federal Highway. He said he’s also considering a brew pub for another nearby spot. “I think it’s a really hip, cool, up-and-coming area in Fort Lauderdale,” Cardaci said. He sees Flagler Village as “where the cool kids play,” with monthly rents in the $1,500 to $3,000 range. “There’s definitely a lot of young professionals in the area,” he said.
Not all the businesses in the area plan to change, even if a reduced parking-space requirement takes effect. Tony Curatolo owns seven properties in the triangle area and said business is fine the way it is now. “I have no problem renting them,” Curatolo said. “I have automobile dealers, airplane part dealers. I have a bit of everything.”
Angela Absolon, co-owner of the ABS Exotic Repair auto shop at Andrews and the tracks, said the change can only help the area. “Even if we decide we want to stay in our current use, we would like the area around us to improve because it has such great potential,” she said. “It seems as if we’re the abyss, and we have all the ingredients not to be the abyss.”
At the Laser Wolf craft beer bar, co-owner Chris Bellus watches the Flagler Village developments under construction and waits. “Most of the stuff isn’t really done yet, so we haven’t seen a huge impact yet,” Bellus said. “It’s cool to see people walking down Andrews… You see the progress and you’re hopeful it’s going to bring a lot more business to the area.” 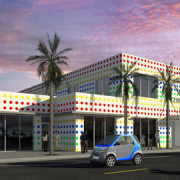