Cushman & Wakefield announced today that Jon Blunk, an experienced South Florida commercial real estate brokerage professional, has joined the firm as Senior Director.  Mr. Blunk will be based in the firm’s Miami office and join William Holly’s commercial leasing team, focusing on agency leasing in Miami-Dade, Broward and Palm Beach counties.
“Jon brings significant institutional experience and success in leasing up many of South Florida’s premier office towers at the highest rates in the market,” said Shane Soefker, Senior Managing Director and Branch Manager of Cushman & Wakefield’s South Florida offices.  “He will be a major asset and key player as we continue to grow our operations here.”
Mr. Blunk was previously Senior Vice President and Director of Leasing at Crocker Partners, a real estate investment firm in Boca Raton.  While there, he was responsible for the marketing and leasing of all of Crocker Partners’ South Florida assets, most notably City Place Tower in West Palm Beach, which he handled from its conception in 2006 to its recent sale to KBS Realty Advisors.  The 300,000-square-foot, class-A office property was the first major office tower to be built in West Palm Beach in more than 20 years, and under Mr. Blunk’s management, was 55 percent leased prior to its 2008 completion and 90 percent leased to numerous high-end tenants at the time of its sale.  Mr. Blunk was also responsible for leasing 400 Royal Palm Way and 125 Worth Avenue in Palm Beach and led the pre-leasing for Crocker’s proposed Atlantic Center in Fort Lauderdale.
Additionally, Mr. Blunk handled third-party leasing while at Crocker Partners, securing assignments for ING Clarion Partners’ 150 East Palmetto in Boca Raton, and General Growth Properties’ Mizner Park in Boca Raton and Related’s City Place North Office Tower in West Palm Beach.
“I’m extremely excited to be joining Cushman & Wakefield,” said Mr. Blunk.  “With the recent addition of William Holly, it’s clear this firm is making the moves to expand its team of talented professionals and strengthen its position in the market.  I look forward to being part of that growth.”
Before joining Crocker Partners, Mr. Blunk was a Senior Vice President and Director of Project Leasing at Trammell Crow Company, where he oversaw the firm’s South Florida office leasing portfolio and sold over $20 million dollars in office condos.  Prior, he was Director of Leasing for Trizec Properties in Chicago, and part of the leasing team for the Sears Tower.  Mr. Blunk began his real estate career at Miglin-Beitler Inc. in Chicago.
Mr. Blunk is an active member of NAIOP, and was a finalist for its Office Broker of the Year award in 2009. Mr. Blunk won the 2000 NAIOP Chicago Chapter Office Deal of the Year (CDW 150,000 sf) He is a member of the Palm Beach Business Development Board and  a former Board Member of the Chamber of Commerce of the Palm Beaches. He is a graduate of Illinois State University. 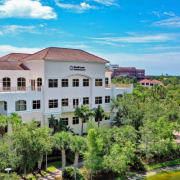