Medical complexes are among 2014’s newest hot commodities in commercial real estate, thanks to Obamacare and aging baby boomers. Hospitals and health care providers expect increased insurance revenue under the Affordable Care Act, encouraging investors to turn their attention to the health arena.
Across South Florida, brokers are reporting a spike in demand from traditional sources and newcomers to the market.
“They’re competing very heavily now,” said Scott O’Donnell, senior vice president of investment properties for CBRE Group Inc. “What we’re seeing is that there are large medical practices and hospitals who are buying up medical campuses. The buyer pool is actually expanding. More traditional office buyers are now looking to acquire medical office buildings.”
Health care-related deals now account for up to 35 percent of his sales compared to 20 percent in 2012, said O’Donnell, who previously focused on office and industrial real estate.
In the South Miami market, broker Steven Hurwitz has seen increased demand from emergency rooms and outpatient surgical centers. In the Village of Merrick Park shopping complex in Coral Gables, for instance, three potential tenants are vying for space at 4425 Ponce de Leon Blvd.
“We’ve got product in Aventura, South Miami, Kendall, Coral Gables­­—all of which have seen an interest in activity on the medical side,” he said. “We have several properties in Coral Gables where historically there was very little demand, but now we have two or three groups that are all interested in the same space. Hospitals appear to be expanding their footprint with secondary locations.”
Uncertainty about changes in federal health laws crippled the sector two years ago, but brokers say real estate demand is on the rise as companies begin to understand the Affordable Care Act, commonly called Obamacare.
“Hospitals have a slightly different model as they’re anticipating increased demand,” said Charles Barton, managing principal at Cresa South Florida, which specializes in tenant-focused commercial real estate. “They’re anticipating that there will be more patients who will be insured, and they are looking forward to providing service to those people directly as opposed to getting referrals.”
Clients are looking for space large enough for five or six physicians instead of offices big enough for two or three. And instead of leasing 3,000 square feet, they now want 5,000.
On the sales sides, buyers have snatched up several properties across South Florida in the last 18 months.
Scottsdale, Ariz.-based Healthcare Trust of America Inc. acquired the four-story Medical Arts Pavilion in Wellington for about $13 million as part of an $84.2 million, five-property portfolio deal. And last September, Investcorp International Inc. generated a $12.5 million profit from the sale of Bethesda Health City in Boynton Beach less than two years after acquiring the property.
At CBRE, where a health care capital markets group responds to increased demand, such sales have fueled business.
In Palm Beach County alone, the company has traded three medical centers in the last seven months.
This month, it arranged the sale of Columbia Medical Plaza, a 43,797-square-foot office park at 4700 N. Congress Ave., to Dallas-based Velocis West Palm LP for about $5.7 million. Also in early January, it brokered the $30.7 million sale of Jupiter Medical and Technology Park. And last July, it traded an 11,000-square-foot medical office building at 1450 S. Dixie Highway in Boca Raton for about $1.6 million.
Brokers say they’re seeing renewed interest on both the leasing and investment sides.
When the Columbia Medical Plaza last changed hands in 2010, more than half of the offices in the 27-year-old building were vacant. This time around, it came to market 83 percent occupied.
“Positive demographic trends, such as the continued in-migration of seniors to the region, make this type of asset extremely attractive to investors,” O’Donnell said. “We’ve received tremendous demand from a number of groups, several of which have changed their business model to acquire medical centers.”
SELF-STORAGE
Just last week, two self-storage facilities in South Florida sold for $54 million.
The buyer, Sovran Self Storage (NYSE: SSS), operates 480 facilities under the Uncle Bob’s Self Storage brand.
The price was noted by the seller’s attorney, Tom Angelo of Fort Lauderdale, as one of the highest per-square-foot sales for self-storage in this region.
“Self storage is a hot market now. These are somewhat unique because they are vertical, meaning they are multi-story buildings. They have wine storage and are designed for a more upscale clientele,” Angelo said.
The properties are at 1401 Mercer Ave. in West Palm Beach and 747 N.E. Third Ave. in Fort Lauderdale.
Angelo said he worked without a broker to run a bidding process with six potential buyers.
Sovran also announced on Thursday three other facilities purchased for a total of 575,000 square feet and $98 million – all in separate transactions.
LODGING
Growth in net operating income and revenue per available room among hotels is forecast to increase through 2016, according to a CBRE Lodging Outlook report.
Hotel supply is increasing gradually and is predicted to grow 1.3 percent this year and 1.6 percent through 2015. New supply isn’t expected to surpass demand until 2016 at the earliest, leaving lodging groups hungry for new property.
Minimal supply, increasing demand, and a stabilizing economy will keep the momentum in RevPar growth positive for the next few years. Through 2014, the increase in RevPar is expected to reach 6.0 percent to 7.7 percent.
Meanwhile, the substantial increase in hotels’ NOI since 2011 is predicted to continue through 2015. With stable capitalization rates, hotel pricing is expected to show similar growth, according to the report. 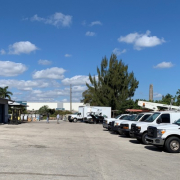