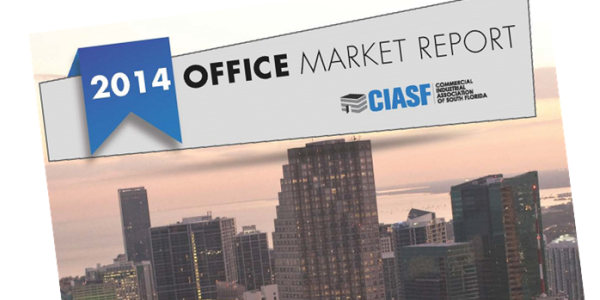 Office space is getting tighter in most parts of Miami-Dade County and rents continue to inch higher, according to a report by the Commercial Industrial Association of South Florida.
The vacancy rate for Miami-Dade office space dipped to 17.3 percent in the first quarter from 17.4 percent at the end of 2013, reflecting a continuation of slow and steady improvement since the recession, according to the report, prepared for the trade group by JLL.
The cheerier outlook reflects, of course, continued improvements in the South Florida economy.
“Unemployment continues to drop,’’ Elizabeth Santos, vice president of Sime Realty Corp., told some 120 commercial real estate professionals gathered Tuesday in Miami for the office-market update.
“You’re seeing an influx of tech companies that want to be in a hot place — ‘hot,’ as in ‘fun,’’’ said Don Cartwright, a JLL senior vice president who joined a CIASF panel discussion of local trends.
“Miami is becoming the gateway city we talked about 10 years ago,’’ said David Preve, principal at CRESA, who sat on the panel.
Infrastructure improvements at PortMiami and growth at Miami International Airport both are fueling demand for office space, he said.
Office rents in Miami-Dade rose 1.6 percent overall in the first quarter, compared with a year earlier, according to the CIASF report. And there is limited new supply in the pipeline: just 128,580 square feet of office space is under construction.
“On the pricing front, six of the nine major submarkets’’ remain in the rising or peak market stage, according to the report.
Most recent demand in Miami-Dade has been for class A office space.
Back in the dark days of mid-2010, the vacancy rate for class A office space in greater Miami stood at 22 percent, but it has slowly and steadily declined to 16.6 percent for the first quarter.
Top quality or “trophy class’’ office buildings in the Brickell downtown area are fetching the highest office rents in the state, averaging nearly $42 per square foot, the CIASF report said.
Eric Groffman, a senior vice president at Transwestern who sat on Tuesday’s panel, said high-quality office space in the Brickell and downtown area is commanding a premium.
Groffman, who was tapped to lease the Courvoisier Centre, a pair of office buildings on Brickell Key, for its new owners, said lease rates are quoted in the range of $45 to $50 a square foot.
A major trend that continues to affect Miami is the push by companies for the efficient use of space. That means squeezing more workers into a space. One consequence of that trend that is becoming particularly evident in the downtown Brickell area is parking is getting scarce.
“One thing you have to be careful of is creating density,’’ said panelist Matthew Goodman, managing principal at CRESA.