Riviera Point Development Group today announced plans for its second South Florida office center to be funded through job-creating, international EB-5 investment. According to CEO Rodrigo Azpurua, CCIM, the Miami-based firm closed on a 2.5-acre site at 9000 NW 89th Court and NW 15th Street that will be developed as Riviera Point Business Center.
The contemporary 41,000-square-foot lake view building, designed by Corrales Group Architects, will offer small businesses and start-ups a toehold in the dynamic Doral market, with flexible office space including suites of 2,000 square feet or less.  The location provides easy access to the Dolphin and Palmetto Expressways and is five minutes from Miami International Airport and the Miami Free Zone.
“EB-5 investment is a win-win as a boost to local communities’ economic development and job generation, and it’s a practical path for investors who, like us, believe the U.S, and in particular Florida, is a highly desirable place to build their families’ future,” Azpurua said.  That path became more practical this spring for both investors and commercial real estate developers, when federal EB-5 offices moved from California to Washington and cut the timeline for processing I-526 immigration petitions under the program from 12 to about six months, Azpurua added.
Announcement of the $9.5 million Doral project comes as the company tops off the first of two buildings at its $17 million, EB-5 funded The Professional Center at Riviera Point at University Drive and the Florida Turnpike in Miramar.  Fully funded, that initial project drew 34 international investors from South America, China, and Europe.
Strategically growing its portfolio of commercial real estate developments, Riviera Point Development Group is among the first developers to successfully navigate the complexities of bringing South Florida projects to market as qualified EB-5 investments, Azpurua noted. “For Riviera Point Business Center at Doral, we expect to begin accepting applications for 19 EB-5 investors in early August,” Azpurua said. “Our Regional Center is already approved by the USCIS and we have obtained the Targeted Employment Area certification by the State of Florida,” Azpurua said.
Riviera Point is at the forefront of a rising trend. “With Miami’s popularity as a destination for foreign capital, South Florida’s financial institutions are becoming more comfortable with EB-5 as a commercial real estate funding component,” noted Randall Sidlosca, an immigration attorney with law firm Arnstein & Lehr, LLP, who lectures worldwide on EB-5 trends.  “As politics in Venezuela cause many high-net worth individuals to contemplate emigrating, some are looking to real estate for a sense of security – and to Doral for its high concentration of Venezuelans.”
Under the U.S. Citizenship and Immigration Services (USCIS) program, the EB-5 program allows a foreign national interested in obtaining permanent U.S. residency to do so by investing in a commercial enterprise that generates at least 10 jobs for U.S. workers for two years. The EB-5 Visa then becomes permanent.  The qualifying investment for a project such as Riviera Point’s Miramar and Doral office centers, each located within a Targeted Employment Area (TEA), is $500,000.  In non-TEA locations, the qualifying investment is $1 million.
While other Florida EB-5 office projects are underway or planned, the partners believe their initial  project was Broward’s first qualified EB-5 office investment opportunity to come out of the ground. They attribute their ability to move ahead — where others have stalled — to their understanding of the EB-5 process and their focus on developing small to mid-size projects that meet market needs.  Their 70,000-square-foot office complex is the Miramar market’s first new Class A office development since 2009. The first building, being built by Itasca Construction Associates, is slated for completion in September, with the second phase to begin in January 2014. Cushman Wakefield is leasing agent for both the Miramar and Doral projects.
Azpurua and Riviera Point Vice President and COO Noel Epelboim plan to continue building Riviera Point’s position as a leader in EB-5 funded projects. The company is actively seeking additional Florida development sites and has a feasibility study underway with a Chinese developer and a private equity investor to explore development of a Chinatown in Miami-Dade.  “After seeing first-hand how vibrant a community Miami is, this group believes all the necessary conditions may exist to make this a success, tapping their existing relationships to make it possible.”
Azpurua has gained prominence for his EB-5 expertise and is a frequent presenter at EB-5 conferences here and abroad. Over the past year, he made four trips to China and several to South America, and met with legislative representatives in Washington D.C.  His development background includes over 1 million square feet of office space in Florida projects since he emigrated with his family from Venezuela, where he practiced law, in 2001.
Epelboim also has a well established development track record as a founding member of Constructora Arquinpro C.A. (Caracas-Venezuela) with 50 completed projects in Venezuela to his credit, including over 2 million square feet of high-end condominiums, as well as commercial and office buildings. In South Florida, his portfolio includes a 65,000-square-foot commercial center in Parkland, a 40-unit condominium in Hallandale and a 25-unit condominium in Bay Harbor Islands, among others. 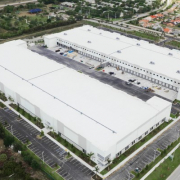 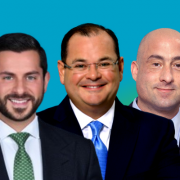