All Aboard Florida announced today that CBRE and Blanca Commercial Real Estate have been selected as the exclusive retail and office leasing agents, respectively, for MiamiCentral, South Florida’s first urban, mixed-use transit-oriented development.
The 3-million-square-foot project being developed by All Aboard Florida spans nine acres just east of Miami-Dade County Hall, and includes an adjacent two-acre site on the corner of NW 2nd Avenue and NW 6th Street in Miami’s Historic Overtown neighborhood. With office, retail and residential components, MiamiCentral will provide a modern, urban “live-work-play” environment where all of Miami’s public transit systems converge, including All Aboard Florida’s new express, intercity passenger train connecting the downtowns of Miami, Fort Lauderdale and West Palm Beach with Orlando. Service is scheduled to begin in late 2016.
MiamiCentral answers the demand of the vibrant, growing population downtown seeking a hub, a core, a place they can connect and identify with. Offering a myriad of authentic and modern eateries, specialty retail, unique entertainment venues, iconic office space and a luxurious residential component, the transit hub is designed to amuse tourists, residents, surrounding neighborhoods and up to 12 million annual business travelers.
CBRE is marketing the retail component of MiamiCentral, which includes nearly 200,000 square feet of leasable retail space on the street level and in the main terminal concourse. MiamiCentral will be a social, connected and active destination with ever-changing offerings to repeatedly and consistently draw patrons.  It will feature a fresh urban market, boutique retail, and vibrant eateries, all directly connected to 1,100+ urban and luxury residential units.
Blanca Commercial Real Estate is marketing the office component, which totals nearly 800,000 square feet of Class A office space with the first two towers encompassing a total of 215,000 square feet, slated for occupancy at the end of 2016.  Across multiple towers, the office space features a landmark iconic design, ample access to all public transit lines and easy access to roadways (including I-95). Amenities include easy access to the development’s own retail, eateries and entertainment, abundant tenant parking and state-of-the-art technological infrastructure with direct connection to the Network Access of the Americas (NAP). Each office tower will offer modern work space, efficiently planned to accommodate agile and modular space configurations and engaging gathering areas.

“MiamiCentral is a major contributor to the burgeoning downtown area, pushing to create a more walkable, urban neighborhood for both visitors and residents.  Featuring unique eateries and entertainment, the development will serve as a highly trafficked commuter pass through as well as a highly desirable destination in and of itself. This is the most exciting combination of developments to hit downtown Miami in decades,” said CBRE Senior Vice President Paco Diaz.
“As the first new Class A office development planned for downtown Miami in years, MiamiCentral will meet growing demand for space among global and local companies,” said Tere Blanca, President and CEO of Blanca Commercial Real Estate. “MiamiCentral will appeal to users that value a dynamic urban location offering direct access to high-speed rail service, varied mass transit options and a host of amenities including on-site retail and dining.”
Michael Reininger, All Aboard Florida’s President and Chief Development Officer, added, “MiamiCentral demonstrates that a true passenger rail system and a connected public transportation system can reinvigorate a downtown, as so many world-class cities enjoy. This is a rebirth for two ideal areas of downtown Miami, an opportunity to create an identity for a historic part of the city, and reinvigorate the desire for mass transit. The importance of downtown Miami is evidenced by the significant investment made not only by All Aboard Florida, but other key developments, and will be a hugely sought after iconic destination, in a newly urbanized neighborhood.”

According to All Aboard Florida, MiamiCentral will benefit from an estimated 12 million business travelers and commuters per year. In addition, approximately 1 million residents currently live within 5 miles of MiamiCentral. Other compelling drivers include: 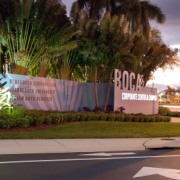