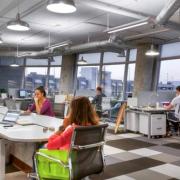 When LearnerNation chief executive Michael McCord needed someone to review service terms for one of its software products, he walked a few short steps from his Pipeline Brickell desk and found an experienced attorney to lend a hand.
McCord also hired a social media specialist for his year-old online learning management firm through Pipeline, a shared-workspace facility that opened in November at 1101 Brickell Ave. A 14,000-square-foot facility with an open layout to promote collaboration among members, Pipeline is more than 70 percent occupied in its first two months of operation.
“We have made so many good relationships here,” McCord said.
As South Florida increasingly embraces a national office market movement toward flexible workspaces, companies that cater to the niche like Pipeline Brickell, 3-year-old Buro Miami and 4-year-old MiamiShared are taking advantage. And longtime players in the flexible-workspace arena, such as Regus, have expanded in the region to accommodate growing demand.
The proliferation of alternative office space represents a post-recession shift away from traditional layouts for many companies, said Roy Abernathy, the Miami-based senior managing director of workspace strategy and analytics at tenant representation firm Studley.
“All the organizations we’re working with in South Florida are considering some aspect of an alternative work environment, whether it’s a law firm, transportation or communications firm,” he said.
The shared workspace model is another way for the region to attract startups and young companies like LearnerNation. Such companies rely on access to vendors and contractors to flourish.
Pipeline, Buro Miami and MiamiShared all host regular events to foster those relationships.
“Knowing the right people is imperative to success,” according to Todd Oretsky, a former attorney who launched Pipeline along with Philippe Houdard.
“You have to be integrated in the business community,” Oretsky said. “You can mitigate risk by knowing the right people.”
At Pipeline Brickell, young entrepreneurs work in close proximity to veteran attorneys and employees from prominent companies like Google and Richard Branson’s nonprofit foundation Virgin Unite.
Startups represent 20 percent to 30 percent of Buro Miami’s membership at the company’s 11,000-square-foot Midtown Miami facility, according to founder Michael Feinstein. Those companies share office, lounge and conference space with many established public relations, marketing and architectural firms.
The growing user appetite for flexible workspace has created stiff competition among providers in South Florida.
MiamiShared’s 2008 arrival in downtown Miami was essentially an accident. Chief executive Alex Daskaloff had about 8,000 square feet of extra office space at 990 Biscayne Blvd. from one of his other companies, according to MiamiShared human resources director Kendal Stoltz.
To generate revenue from the dormant real estate, Daskaloff decided to try out a co-working model at the 990 Biscayne office. The venture took off as MiamiShared immediately attracted technology companies, graphic designers and real estate brokers, among others.
“Today we just rented out the last dedicated desk available, so all of our offices are rented out,” said Stoltz, who added MiamiShared also has a recreational softball team.
The company plans to expand in downtown Miami and is considering similar concepts in Fort Lauderdale and Las Vegas, she said.
As for Buro Miami, Feinstein started the venture after seeing shared workspace concepts take off elsewhere in the United States and Europe.
“When we launched, it was the first breed of new co-working spaces in South Florida,” Feinstein said. “It was exciting to startups and young companies. I think it’s great that they now have various options because it does encourage collaboration. … It helps retain companies when there is a vibrant, dynamic ecosystem.”
Fueled by the success of the Midtown location, Buro next month is set to open a Miami Beach facility in the Sunset Harbour neighborhood. About half of the space is reserved despite minimal marketing, Feinstein said.
“We target clients who are entrepreneurs and creative professionals who want to be in a work/live neighborhood with a lot of amenities,” he said. “In my view, Midtown and Sunset Harbour are the two best work/live environments.”
Chloe Keidaish, a Miami-based architect for nearly two decades, started her own firm at Buro’s Midtown facility following a two-year stint in Dubai. Her firm, Studio X Architects, designed Buro’s new Miami Beach facility.
“I’ve been here since they opened,” she said. “It’s a great place to start a new business. I’m doing the same sort of projects I was doing for larger companies, but I’m able to do it out of this incredible space.”
For Pipeline, Oretsky and Houdard looked for a building in the rapidly growing Brickell area that would appeal to professionals from all walks of life. After an extensive search, the Pipeline co-founders were drawn to the tenant mix at 1101 Brickell.
“We needed a building where people felt comfortable whether they were in shorts or a suit,” Houdard said. “There are a lot of lawyers in the building; [Florida International University] is in the building. The location is amazing, and the area is growing residentially and commercially.”
Oretsky and Houdard said they have no immediate expansion plans for South Florida but are in talks to take Pipeline to Latin America.
Pipeline, Buro and MiamiShared operate under monthly membership structures, while Regus enters into service agreements with clients for temporary and virtual offices.
Regus began competing in the shared workspace arena about two years ago, however, with the formation of the Businessworld membership program. Through four levels of membership, clients can access the company’s business lounges and shared and private office space at any of its 1,500 locations around the world.