In the latest sign of confidence in Downtown Miami’s resurgent office market, Crocker Partners, the market’s largest Class A office space owner, has completed a $15 million makeover of its 31-story, 449,000-square foot SunTrust International Center.
The transformation of the tower brings a completely redesigned lobby and streetscape, a 4,000-square foot bayview sky terrace, a complimentary tenant fitness center, and a state of the art conference facility. The renovation also includes 20,000 square feet devoted to fully finished office suites for companies new to the market and for growing start-ups.

“Millions of square feet of new residential and retail developments in Downtown Miami have transformed it into a truly livable 24/7 urban center,” said Angelo Bianco, Partner in Crocker Partners. “Domestic and foreign net migration into this gateway city have already driven retail and residential rents to all-time highs. This new energy and economic resurgence is attractive to Class A office tenants who have quietly been soaking up vacant space and whose growth will significantly outpace supply in the urban core over the next five years. We predicted this trend in 2011 when we acquired SunTrust Center with the plan of performing major renovations to take advantage of today’s strengthening market.”

SunTrust Center will have the largest contiguous block of space available in the CBD, 116,000 square feet, when Akerman LLP vacates later this year. The prime, high visibility space on the upper floors offers views of Biscayne Bay and Downtown, along with signage opportunities.
SunTrust Center also has the Downtown’s highest parking ratio, a distinct advantage, according to Jon Blunk, senior director of Cushman & Wakefield Commercial Brokerage Services, who is responsible for SunTrust Center leasing, along with brokers Cristina Glaria and Laurel Oswald. The building is Silver LEED certified, has 11 high-speed elevators, and on-site amenities including a restaurant, pharmacy and banking.
The renovation’s Class A ready-to-move into suites of 1,000 to 2,600 square feet are a new and hassle-free option for smaller businesses, Blunk explained.

“There’s been a proliferation of executive suites in the Downtown. As companies outgrow that space and hire their own administrative staff, SunTrust Center is dedicating more than a full floor to meet their needs. While smaller suites are traditionally carved out of a building’s least desirable space, we’ve allocated prime footage for these tenants. The suites have spectacular views and the same amenities larger space users enjoy.”

“Downtown Miami‘s commercial district is thriving and is on the upswing,”Blunk said. “Crocker Partners’ commitment to the market and reinvestment at this scale is just the latest indicator of key players’ confidence in Miami’s future.”

Overall, the CBD vacancy rate ended the year at 15 percent, down 5.2 percent from the prior year, according to Cushman & Wakefield’s Marketbeat report. The report forecasts escalating demand for top tier office space in the urban core in 2015, with the area remaining one of the most sought after locations in South Florida, and poised for incomparable economic growth in the next three to five years. 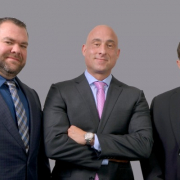 IT Powerhouse Leases 43,000 SF In Miami For North American HQ