The site was purchased by Dalfen Industrial, an industrial real estate investment manager with a portfolio of over 25 million square feet nationwide.

“North Dade Distribution is strategically located in Hialeah Gardens, proximate to the Miami-Dade and Broward County Line, allowing for efficient and equidistant access to the population of the two densest South Florida counties,” said Lobón, an Executive Vice President at CBRE. “The site provides easy access to Interstate 75 and the Florida Turnpike via NW 138th Street. Access will be further enhanced by the new Florida Turnpike interchange at NW 170th Street, which is planned to be completed by 2023.” 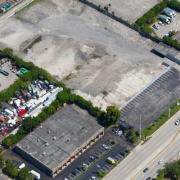